Can you do me a favor? 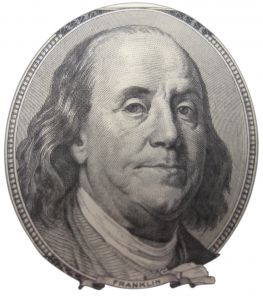 When Franklin ran for his second term as clerk of the Pennsylvania Assembly, one of his colleagues delivered a long speech to the legislature attacking him. In Franklin’s autobiography, he describes the un-named man as “a gentleman of fortune and education” and thought he would one day become a person of influence in the government.

Franklin hatched a plan. “I did not … aim at gaining his favor by paying any servile respect to him but, after some time, took this other method.” Franklin had reputation as a book collector and sent a letter to the opponent asking if he could borrow a selection from his library. “Having heard that he had in his library a certain very scarce and curious book I wrote a note to him expressing my desire of perusing that book and requesting he would do me the favor of lending it to me for a few days.”

The opponent obliged and a week later, Franklin returned the book with a thank you note. The two crossed paths at the House and for the first time ever, the opponent spoke with him “…and with great civility; and he ever after manifested a readiness to serve me on all occasions, so that we became great friends and our friendship continued to his death.”

Franklin wrote, “This is another instance of the truth of an old maxim I had learned, which says, “He that has once done you a kindness will be more ready to do you another than he whom you yourself has obliged.” In other words, when you get someone to do you a favor, they like you more. The reverse is also true. If you act negatively towards someone, you’ll justify that action mentally and emotionally.

Think about the last time someone asked you for a favor. There’s a combination of flattery that your opinion has been sought, and a sense of accomplishment that you can help someone out. It runs counter to what we believe is the more effective way of getting what you want. We think if we do something nice for someone, they’ll think well of us and want to be nice in return. It turns out the more effective approach is to ask them to do something for you.

The principle is most active today through interactive marketing. When a company asks you to help name a product or assist with design, they’re employing the Benjamin Franklin Effect. Because you engage with the brand, you act more favourably towards it.

As humans, we like our thoughts, feelings and actions to be aligned. If you act positively towards a brand, you’ll ensure your thoughts and feelings are positive as well. Brand X asked for your opinion therefore Brand X is good. Have you noticed the Benjamin Franklin Effect in action?

How understanding the herd mentality can improve your business