By now you know that WHYY and NPR are a couple of my favorite ways to keep up with the world.  One of the reasons for this is that they cover cool stuff. They also drive traffic to their websites by letting you know, at the end of a broadcast segment, that you can find the relevant link on their site. Pretty clever. 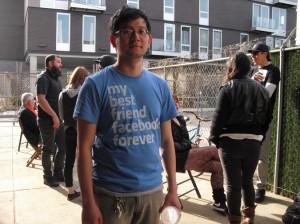 A story about Facebook caught my attention this week. A young man, Dave Kim, as part of a performance art piece called My Best Friend Facebook Forever, did everything Facebook told him to do for the month of April.  Everything.  He had to attend every event to which he was invited, friend everyone (at least 30 per day) that Facebook suggested, and “like” everything that was suggested to him. A partner helped him decide between conflicting events and also helped chronicle the experiment. There was a lengthy set of rules that governed the experiment, and laid out how Dave would document what he did each day.

One insight that Dave gained is that the suggestions that Facebook makes have the express purpose of pushing us to share our personal information and spend more time on the site. It is for their benefit and not our (perceived) popularity. OK most of us already know that, but I found it refreshing to see it as a revelation resulting from this experiment. Another fascinating thing is that Facebook decided that he was a spam bot and shut his account down, for doing exactly what they told him to do!

The site describing his project, www.mybfff.com has the stats and a final essay on the project. He increased his friends from 210 on April 1 to 966 on April 30. One friend asked if he would be “unfriended” at the end of the month. Dave has not had time to consider the long term effects of his project, but a fascinating social experiment nonetheless. And he will fulfill commitments that he made, like being someone’s pen pal for the coming year.

For me, Facebook is less a habit, and more something that I check into when I think about it and I have a spare minute, and I never take their friend suggestions or site suggestions seriously.  I am probably not the person that Facebook advertising is aimed at though. How about you? Do you check in every day?  Do you follow Facebook’s recommendations for friends and sites?  Let me know in the comments!

Creating readme.txt for Our WordPress Plugin

Are You Giving Your Customers a Headache?

Adding a Logout Link to Your WordPress Theme, Plugin or Widget