Juggling Your Way to Success 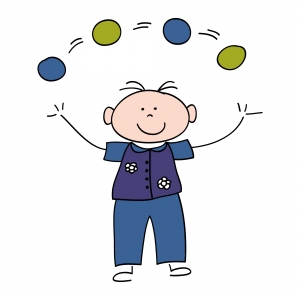 Today, I attended a conference called ‘Mind and Its Potential’ which gathers leading researchers in brain science and cognition from eastern and western traditions. It was a fascinating day. I listened to V.S. Ramachandran, Professor with the Psychology Department and Neurosciences Program at the University of California, San Diego, discuss mirror neurons and Buddhist nun, Venerable Yeshe Khadro, talk about attitudes to death and dying. There was an Olympic Gold medal winning volley-baller talking about how self-belief is the core of success with elite athletes (along with loads of training). And a young man talked about his determination to recover after an horrific car accident.

The final talk of the day was titled ‘Juggling Your Way to Success’ by Michael Gelb. And he literally taught the room how to juggle. We started with one ball, then two. He demonstrated how to juggle three balls. Michael is an innovation and creativity expert who travels the world talking about how Leonardo da Vinci and Thomas Edison came up with so many great ideas. And how juggling can help brain function. He used to juggle at Rolling Stones concerts, by the way.

German researchers divided 24 non-jugglers into two groups and assigned one group to practice juggling for three months. The scientists performed brain scans on the volunteers using magnetic resonance imaging, or MRI, before and after they learned to juggle.

Those who now acquired the skill demonstrated an increase in gray matter in two areas of the brain involved in visual and motor activity, the mid-temporal area and the posterior intraparietal sulcus.

It reinforced the theme of the day, that the brain likes to be challenged, excited, and stimulated. If we don’t use it, we lose it.

In Gelb’s book “The 5 Keys to High Performance Learning”, he outlines these principles:-

You don’t need to take up juggling to challenge your brain. But keep feeding it with new experiences. Drive a different route to work. Strike up a conversation with someone new. Teach yourself a new trick. You’ll be more productive for it!

Tips for Going Global with PPC

Be More Productive: Work on Happiness