I’m a big fan of the radio show, This American Life. Each week, Ira Glass and his team pick a topic and examine it from several perspectives. Like a play, there are several acts that illuminate a story in fresh and surprising ways. It’s long form journalism through voice and week after week, it delivers engaging and thoughtful content. 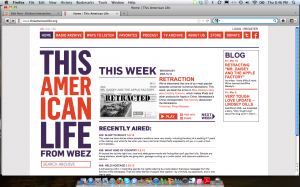 This week, This American Life used an entire show to issue a retraction. In January, the show aired a very powerful, evocative story about exploited Chinese workers who make iPads and iPhones – with graphic descriptions of long hours, underage workers and injuries from dangerous chemicals. It was a powerful piece of radio. I was horrified to think my iPhone was created in such circumstances. Performer Mike Daisey put the show together, based on his travels to the Chinese factories where this exploitation was taking place. Or so we were led to believe. It turns out Daisey engaged in ‘faction’ – fact and fiction – embellishing many stories for impact. It backfired.

The fascinating part for me was how This American Life handled the situation. Rather than a one line ‘we were duped, sorry about that’, the program spent an entire show explaining the measures it took to verify the story, and hearing Daisey’s stumbling explanation. There was a broad apology about allowing the show to go to air. You could hear the disappointment in Ira Glass’ voice. For me, the admission of the error and an investigation into how it happened was revealing. Instead of sweeping it under the carpet, it shone a light. A lot was gained in my view.

It’s hard to go back over a mistake and unpick it, especially when you adhere to high standards. But I admire This American Life for doing so.