On Sunday afternoon, the Women’s World Cup was awarded to Japan, after an amazing, exciting game between them and the United States.  And in the midst of the excitement and chaos and screaming and disappointment, the world tweeted. And tweeted some more, until the record for tweets per second previously set at the turn of the New Year in Japan at 6,939 tweets per second, was drubbed by the 7196 tweets per second during the climactic ending to the women’s game. 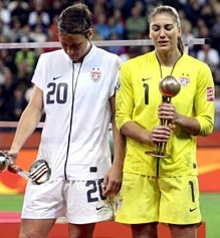 Hope Solo, goal keeper for the United States, entered the tournament with less than 10,000 Twitter followers, and at last check was closing in on 200,000 followers. I am sure that while this may be a comfort to her, she would have preferred the trophy!

The White House was among those tweeting during the game. There were tweets by@BarackObama, including an apology for not being able to attend, but with a picture of the first family watching the game on television.

Various articles and blogs are talking about all the famous people from other sports tweeting their encouragement to players, as well as celebrities from movies and television putting in their 140 characters worth.

Twitter has been in the forefront lately with other initiatives like the  first live tweeted Town Hall meeting with President Obama on July 6. Watching the live stream during the video of the town hall was both enlightening and infuriating, even though I realize that events such as this always bring out the under-educated trolls in addition to those with articulate and valid comments to share, whether positive or negative.

Just like all the other social media outlets, Twitter is looking for it’s relevant niche in the lives of those who use it.  Sports, politics, world news, and Charlie Sheen, it appears there is something for everyone.

Virtual Office of the Future is Here!

Caution: Blogs are Not Easy to Maintain

Be Where Your Customers Are – Social Media Marketing Lesson