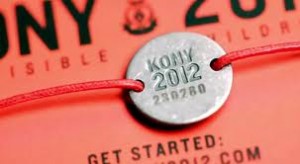 With more than 100 million views, KONY2012 has certainly captured worldwide attention. Don’t know what I’m talking about? In brief, US-based organization called ‘Invisible Children’ created a thirty minute video and campaign to highlight the plight of Ugandan children stolen from their families and enlisted as child soldiers. The man responsible for the kidnapping and abuse is Joseph Kony, who ranks #1 on the International Criminal Court’s most wanted list. So far, he has evaded capture. Invisible Children has mapped out a campaign to galvanize and inspire all citizens to sign a pledge and lobby cultural influences (movie and music stars) and policy makers (political leaders and commentators) to use resources to find Kony and return the chidren to their families.

I don’t want to get into a discussion about whether this is a helpful approach to solving complex international problems. But I am interested in looking at how this group has applied Internet marketing techniques to this cause. 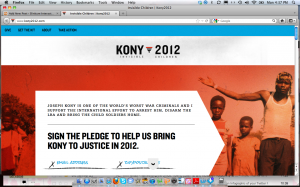 When you visit www.kony2012.com, there’s a brief description of Joseph Kony’s war criminal status and a call to sign a pledge to bring him to justice. The goal is clear (pledge support) and it’s easy to achieve (include email address and zip code).

2. Straightforward and clear website design
All the actions they want you to take are laid out for you. You don’t have to search for ways to access movie or music stars or policy makers you’re encouraged to lobby. It’s all there and just a click away. These days, most people have social media buttons to encourage easy sharing. This website is locked and loaded and easy to navigate.

3. Use of Influencers
One of the reasons this campaign went viral is because globally recognized people were enlisted to support the campaign. These so-called ‘influencers’ have a large social media following and an ability to affect the debate. Targeting 20 influencers and 12 policy makers is smart. It’s a manageable number and let’s face it – which celebrity won’t want to bring a war criminal to justice? It gets global attention.

4. Use of Video to Tell the Story
We’re a visual culture. Much as it pains me as a writer, I accept the power of the visual medium. Jason Russell’s 30 minute video makes the campaign accessible by telling it through people: his young son, Gavin, and Ugandan child soldier, Jacob. It’s emotional, accessible and uncomplicated. It’s part documentary, part movie trailer and part music video clip with a clear message: stop Joseph Kony.

5. Expiry date for campaign
To give the campaign a sense of urgency and focus, the organizers have an end date. 31st December 2012. This is very clever because it makes you want to act sooner rather than later. It’s an important tactic in getting people to take action. Without an end date, you can put off the action.

By the end of the video and web experience, you’re made to feel as though you can make a difference. And all the tools are set out for you just a click away. Internet marketers can learn a lot.